A Thiol-Specific Linker for Bioconjugation

Water-soluble chemical linkers have a variety of uses across the physical sciences. The ability to covalently link biomolecules and substrates has proven an extremely useful tool for a number of biomedical applications, with methods of bioconjugation including PEGylation of proteins/peptides to improve in-vivo stability, conjugation of peptides to improve cell permeability of drugs and the attachment of imaging labels generating new diagnostic tools.

Antibody-drug conjugates (ADC’s) are a particularly interesting branch of conjugation chemistry and consist of an antibody, linker and a drug payload. The antibody targets a specific receptor protein which results in internalisation of the conjugate within the cell. The toxic payload is then released, often by degradation of the linker, allowing for targeted cell death. The development of stable linkers is an important aspect of the development of ADC’s as these limit off-target effects through the degradation of the conjugate and unwanted release of the payload.

There are a number of different linkers reported within the literature for use in ADC synthesis, with several thiol-bioconjugation methods already known to possess limitations. For example, disulfide bond conjugations are labile under both reducing and basic conditions, the reaction between a maleimide and a cysteine thiol yields a diastereoisomeric mixture of bioconjugates which could have different physiochemical properties, and the thiol-ene reaction (Michael addition of a thiol to a vinyl group) has been studied numerous times but also suffers from slow reaction kinetics.

Recently, it was shown that the thiol group present in cysteine and glutathione rapidly displaced the nitro group of a 4-nitropyridine derivative under physiological conditions (pH 7, 20 °C, 40 mins). The formation of a thioether bond in this case was exploited for tagging peptides and proteins with rare-earth complexes.

In this short study, we sought to extend the use of the 4-nitropyridine motif and develop a novel method for thiol-specific ADC bioconjugation.

The synthesis of our chemical linker began with the reaction of 4-nitropyridine N-oxide with dimethylsulfate followed by cyanation to give the 2-cyano-4-nitropyridine (1.) in a 55% yield. Hydrolysis of the cyano group under acidic conditions revealed the free carboxylic acid (2.) in a 76% yield (scheme 1), which was available for coupling to an amine moiety of a given linker. We have been involved in the synthesis and supply of bifunctional PEG compound over recent years and we exploited their use here to aid in the aqueous solubility of our final chemical linker.

The bifunctional PEG linker was constructed from triethylene glycol and involved double mesylation and substitution with NaN3 to afford the bis-azide (3.). Mono reduction under Staudinger conditions afforded the primary amine, which was then reacted under standard amide bond formation techniques (HATU/DIPEA/DMF) to give the protected chemical linker (5.) in a 76% yield, following column chromatography. 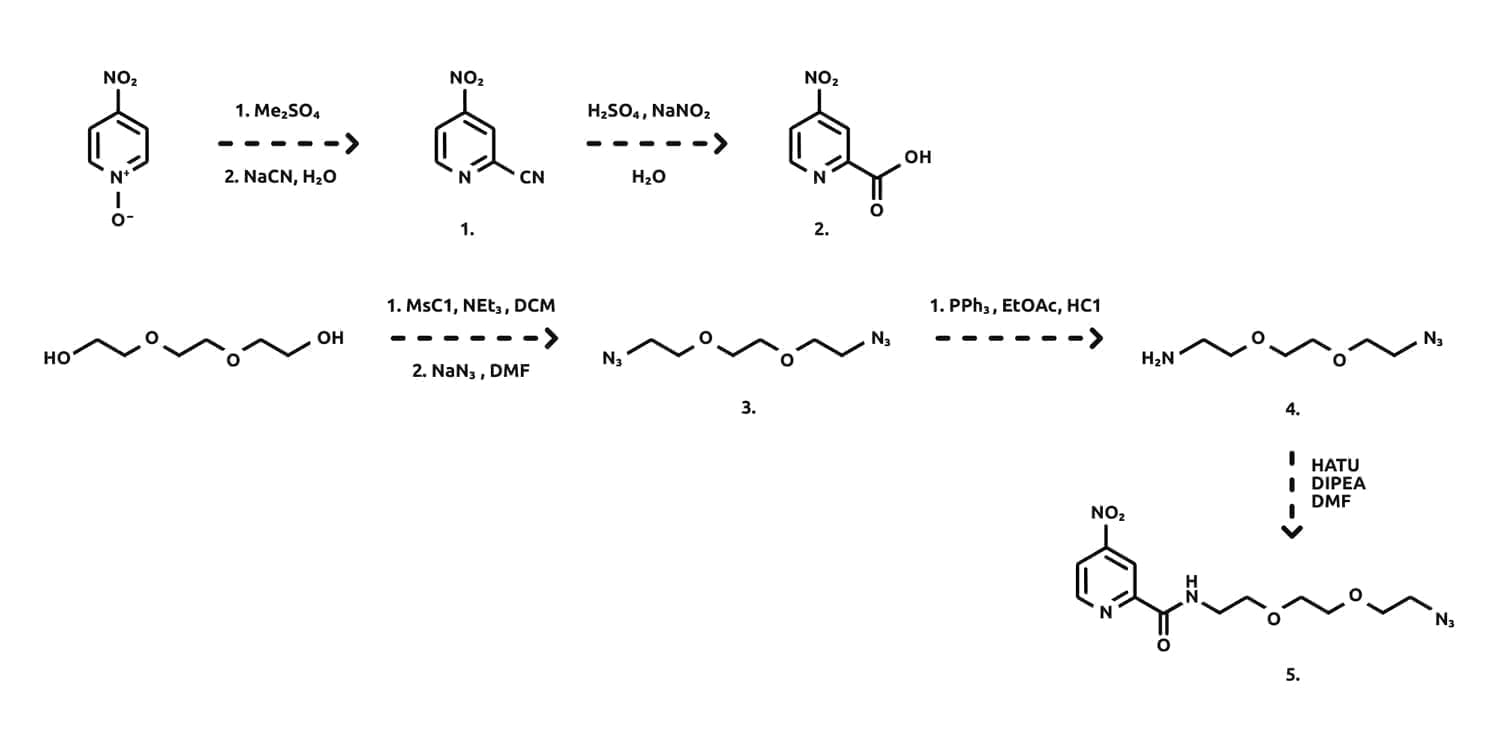 With the linker in hand, we investigated the displacement reactions of the nitro group with two nucleophilic amino acids residues. The addition of L-cysteine to an aqueous solution of linker (5.), in the presence of Hunig’s Base (2.0 eq.) led to the displacement of the nitro group and the formation of the cysteine conjugate of (5.) after 16 hours at RT. Unsurprisingly, the addition of L-cysteine to precursor (2.) under the same reaction conditions led to formation of the conjugate in less than 1 hour. This can be simply attributed to the increased aqueous solubility of the acid precursor. It is envisaged that attachment of a drug motif at the terminus of the azide (for example through reaction with an appropriate alkyne under ‘Click-Chemistry conditions) should afford a more water-soluble linker and lead to an increased rate of reaction.

Happy with the formation of the thiol linked conjugate, we investigated the specificity of the reaction by repeating the conjugation with an alternative nucleophilic amino acid, L-lysine. This time, despite extended reaction times, no conversion to the lysine conjugate was observed. Further evidence for the thiol selectivity was obtained when L-cysteine (1.0 eq.) was added to an aqueous solution of the linker, along with L-lysine (20 eq.), with only the cysteine conjugate visible by ESI-MS. These results correlate well with the known nucleophilicities of amino acid residues, whereby cysteine is 104 times more nucleophilic than corresponding amino functionalised side chains.

Given that the aim of this short investigation was to demonstrate the utility of our new linker in experiments involving protein bioconjugation, we decided to investigate the reaction of linker (5.) with a model protein, Bovine Serum Albumin (BSA). BSA is a large protein and contains a single surface cysteine at position 58, making it a suitable protein to test the reactivity and selectivity of our novel linkers in the presence of other nucleophilic residues.

Utilising our semi-optimised reaction conditions, an aqueous solution of BSA was added to a solution of linker (5.), followed by the addition of Hunig’s base. The reaction was stirred overnight at RT, at which point complete conversion had been achieved. Analysis of the crude reaction mixture by ESI-MS revealed species with M/Z = 66,459 and 66,735 Da corresponding to the native BSA and the linker derived BSA, respectively. These results confirm that we had successfully achieved ligation of BSA, presumably through displacement of the nitro group by the thiol residue of Cys58. 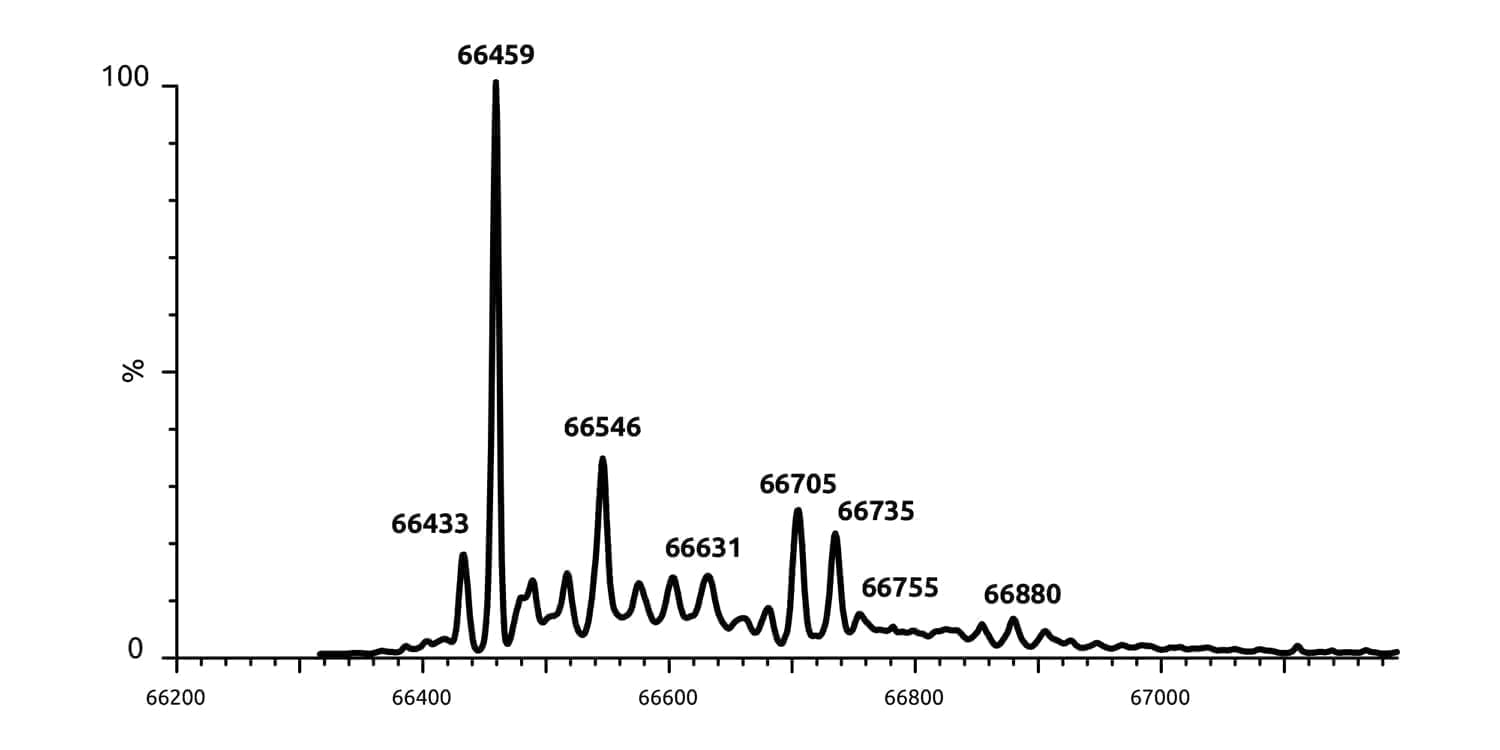 Figure 1. ESI-MS showing the presence of the BSA-linked conjugate.

Although further developments in terms of the SNAr reaction kinetics, aqueous solubility of the linker and nucleophilic specificity are needed, this short investigation was able to demonstrate the potential use of the 4-nitropyridine moiety as a thiol-specific acceptor for bioconjugation.

HFR would like to thank the Royal Society of Chemistry for the award of an Internship Grant to support this study and Dr. Jackie Mosely at Durham University for mass spectrometry analysis.

With over 32 years in operation, High Force Research have accumulated broad and deep knowledge across multiple chemical sectors.

I accept
We use our own and third party cookies that are essential to make our website work. We also use other cookies for analytics on site usage to help us improve our site and give you an easy and personalised experience. You can 'Accept All' other cookies or customise your preferences to reject or permit specific cookies by visiting "Cookie Consent" and selecting "Cookie Settings" in the pop-up at the bottom of the window.

This website uses cookies to improve your experience while you navigate through the website. Out of these cookies, the cookies that are categorized as necessary are stored on your browser as they are essential for the working of basic functionalities of the website. We also use third-party cookies that help us analyze and understand how you use this website. These cookies will be stored in your browser only with your consent. You also have the option to opt-out of these cookies. But opting out of some of these cookies may have an effect on your browsing experience.
Necessary Always Enabled
Necessary cookies are absolutely essential for the website to function properly. These cookies ensure basic functionalities and security features of the website, anonymously.
Functional
Functional cookies help to perform certain functionalities like sharing the content of the website on social media platforms, collect feedbacks, and other third-party features.
Performance
Performance cookies are used to understand and analyze the key performance indexes of the website which helps in delivering a better user experience for the visitors.
Analytics
Analytical cookies are used to understand how visitors interact with the website. These cookies help provide information on metrics the number of visitors, bounce rate, traffic source, etc.
Others
Other uncategorized cookies are those that are being analyzed and have not been classified into a category as yet.
Save & Accept
Powered by